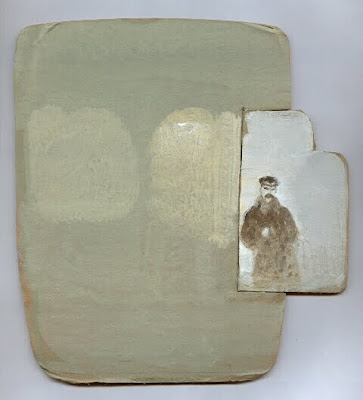 Piłsudski, which began as an image of anonymous figure in heavy coat from the time of the Russian Civil War--his strong character caught my eye, as with Chapayev, the legendary Bolshevik hero (listening to song,"Гуляал по Урали Чапаев-Герой"--Chapaev-the-Hero Strolled through the Urals), which sounds about right here except that the picture is indeed Josef Pilsudski--the aristocratic Polish commander who defeated the Red Army in the battle for Warsaw in 1920--about the time of the photo was made. Contradictions. On top of which, the painting shows a more ambiguous, pensive figure--fur-collared great coat notwithstanding.
Posted by Anthony Dubovsky at 7:39 PM